Thanks to ionospheric propagation of radio waves, ham radio operators can rely on HF ionospheric radio signal propagation to communicate with fellow hams located way beyond the horizon.

The ionized layers of the ionosphere make HF radio wave propagation possible much beyond line of sight distances. These layers can be viewed as our "Seven League Boots" which, by leaps and rebounds, give our ham radio HF signals the ability to travel great distances! 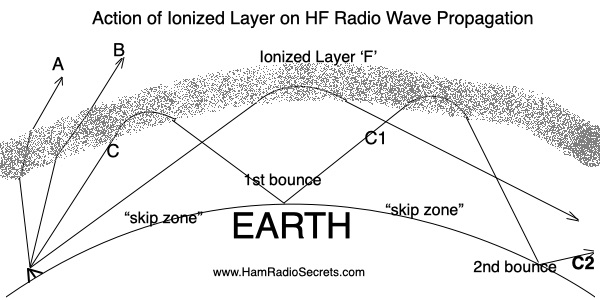 I'll explain, in a moment, how the 'F' layer is the most useful ionized layer for DX.

Best of all, solar sunspot cycles improve HF propagation because they revitalize our ionosphere. The good news is, solar cycle 25 has begun! Ham radio operators, all over the world, are looking forward to its increasing activity. 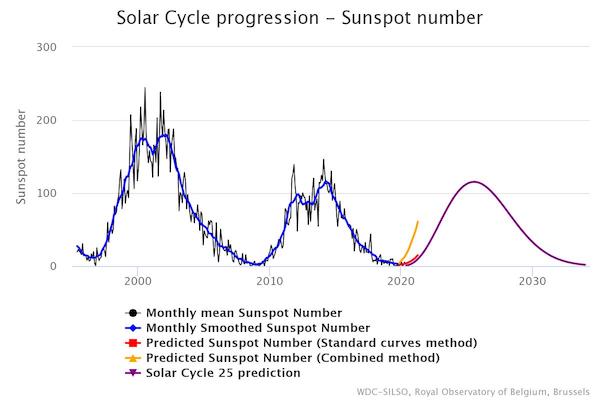 This 11 year sunspot cycle graph illustrates the highs and lows of ionospheric propagation of radio waves.

Scott W. McIntosh, Deputy Director of the National Center for Atmospheric Research in Boulder, et al., conclude, in a recent research paper published on October 13, 2020, that " sunspot cycle 25 could be among the strongest sunspot cycles ever observed".

The radio signals 'A' and 'B', arriving at the ionized 'F' layer at too steep an angle, will simply go through it and be lost in space.

The HF signals will gradually lose energy after each refraction by the 'F' layer and after each rebound off the earth's surface... until it is no longer discernible. But, by that time, it will have traveled thousands of miles and been heard by countless radio amateurs and shortwave listeners!

Ionization of the upper reaches of earth's atmosphere occurs when ultraviolet radiation from the sun collides with hydrogen and helium molecules that are few and far between up there. These collisions detach electrons from the gaseous molecules.

As a result, positive hydrogen and helium ions are generated and negatively charged free electrons are liberated from their nucleus. These regroup into ionized layers above the earth.

A pictorial diagram of the ionosphere layers responsible for ionospheric propagation of radio waves.

However, ionized layers only form when the sun is "active", which it is for about 9-10 years, every eleven years or so. It's commonly called the 11-year sunspot cycle.

We can see the progression of the last few sunspot cycles in the graph shown earlier. You can obtain more information on the 11-year cycle of sunspots here.

In the daytime, it forms under the sun's intense UV radiation and constitutes a barrier preventing amateur radio signals in the 40-meter, 80-meter and 160-meter bands from getting far and from being heard in the intense atmospheric noise.

Meanwhile, signals 10 MHz and above can get through to reach the ionized layers above and make their way beyond the horizon.

The 'D' layer dissipates at sunset. Signals in the 160-meter to 40-meter bands then become free to reach the 'F' layer and reach DX amateur radio stations like the other higher-frequency signals.

During daytime hours, in theory, layer 'E' could refract 5-20 MHz signals and help them along their way.

However, in reality, the 'D' layer (below) absorbs much of the energy of signals at these frequencies. Only signals in the 7-14 MHz range - transmitted near vertically - will be able to punch through the 'D' layer with enough remaining energy to reach the 'E' layer and be refracted along to reach as far as 1200 km (750 miles) at times.

The periods just before dawn and right after dusk  are best to make use of the 'E' layer. At night, the 'E' layer disappears almost completely, while still remaining somewhat useful to the propagation of signals in the 160-meter band.

Sporadic 'E' propagation (Es) is useful at frequencies above 28 MHz, in the VHF range, rarely below. We cover their usefulness in extending the reach of VHF signals beyond the horizon on another page of this website.

Both 'E' and 'Es' propagation contribute to 50 MHz activity.

The 'F2' layer plays a major role in the ionospheric propagation of radio waves of the HF spectrum.

It is usually around all year round.

The 'F2' ionized layer is present during the major part of a solar cycle.

However, it will sometimes disappear completely for days on end during a deep solar cycle minimum!

The 'F2' layer will reach its highest density at the peak of a solar sunspot cycle.

It will then refract toward earth radio signals ranging from 7 MHz to 30 MHz and enable them to reach distances as far as 4000 km from their origin, rebound off the earth to rise again to the 'F2' layer... and repeatedly do so… sometimes to travel right around the earth and come back from behind their point of origin!

During the better nine years or so of a solar cycle, QRP operators (5 watts of radiated power or less), using simple dipoles, can make DX contacts as far and as often as the QRO operators (using up to 200 to 300 times more power) using a multi-element directional antenna!

During such wonderful periods, every ham radio operator has an equal chance under the sun to make DX contacts.

Ionospheric Propagation of Radio Waves is a Complex Topic

The information I have presented to you in this article is a very brief summary of what could be said about HF ionospheric radio signal propagation. I have really only scratched the surface!

Countless scientific publications have covered many aspects of the subject since the discovery of the ionosphere's existence and, later, its role in the propagation of HF radio signals.

For more on our sun's behaviour, visit the Solar and Heliospheric Observatory (SOHO).