I finally managed to 'squeeze' in a resonant 160 meter antenna on my property... and it works!

Normally, a dipole for 160 meters requires at least 260 feet of horizontal space, plus supporting ropes at each end. Furthermore, it is usually installed much too close to the ground, relative to its operating wavelength, which turns it into a NVIS (Near Vertical Incidence Skywave) antenna, only good for very short-range communications. (More on NVIS here.)

My shorter version has a vertical component to it, which increases the likelyhood of longer-range communications.

So. How did I manage to fit a resonant antenna on the 160 meter band in less space than normally required?

Instead, it's a 'hybrid' design because, depending on how you look at it... 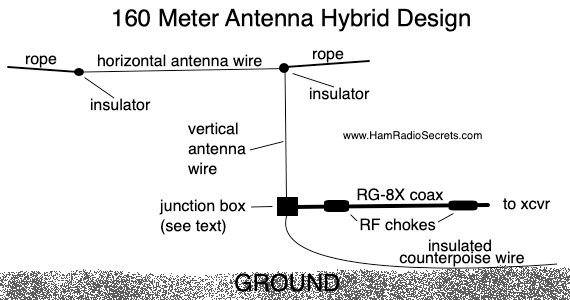 On my first attempt, I had the entire length of counterpoise wire laid out on the ground, snug against the house foundations, and running all around the house to the opposite side.

But, working with a RigExpert antenna analyzer I soon found out that the antenna was resonant way below the 160 meter band. It was too long. Its resonant frequency was around 1.7 MHz!

I decided to keep a 1/4 wave of wire up in the air as the 'active' part of the antenna. I then proceeded to shorten the counterpoise to bring the resonant frequency up above 1.8 MHz.

To do so easily, without wasting precious antenna wire by repeated pruning, I wound the end of the counterpoise back on itself in a rough coil about 6 inches in diameter.

After a few attempts, I finally obtained resonance on 1.841 with an SWR of 1.07:1 which is within the lower part of the band where I intend to operate most of the time. 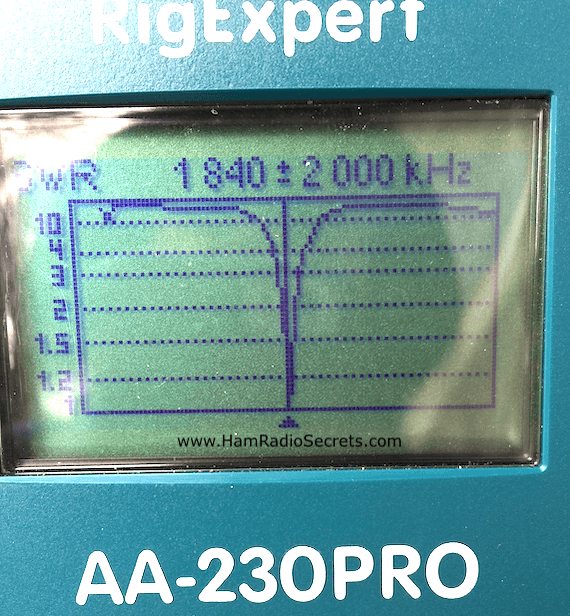 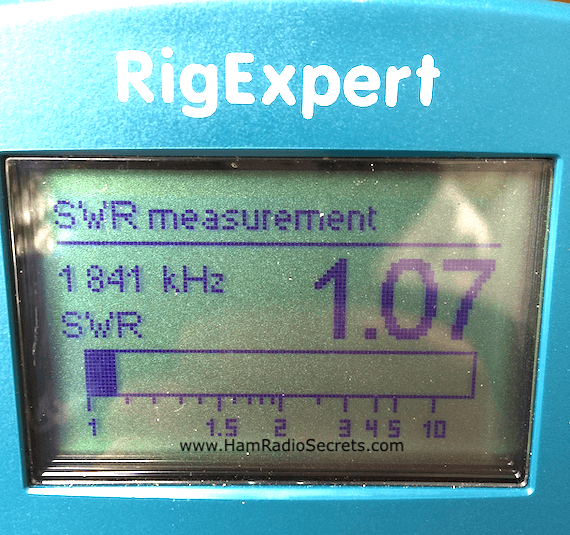 In the end, the counterpoise ended up measuring 62 feet overall, with the roughly coiled up portion at its end. 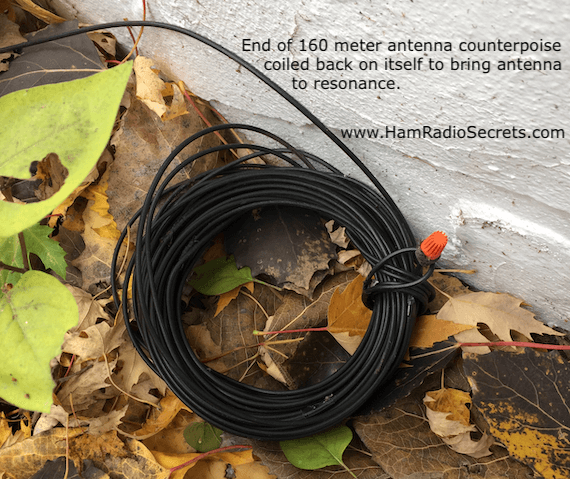 Notice (on the photo) that I have an orange electrical wire connector (waterproofed with CoaxSeal™) on the end of the counterpoise wire to prevent the 'live' inner conductor from making contact with the wet grass, wet leaves or wet snow.

Why? Because, if the inner conductor of the insulated counterpoise wire were to touch ground...

I feed my antenna with RG-8X coaxial cable. It is connected directly to the antenna, without a UNUN! The connections are protected by a weatherproof outdoor electrical junction box, installed outside, about four feet above ground. 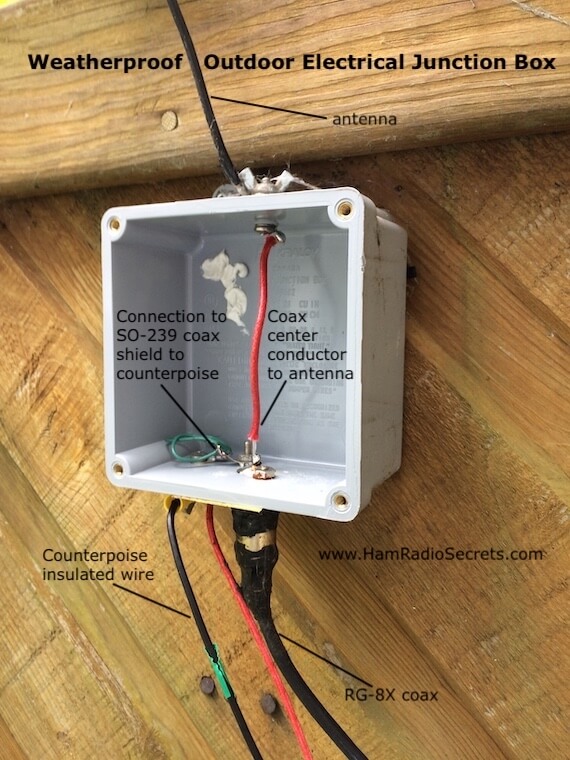 (Disregard the red wire under the box. It's from an earlier experiment. I had forgotten to take it off before taking the photo.)

To prevent common mode RF from traveling back on the coax shield of the transmission line, I feed the antenna through a homemade RF choke made of 22 turns of RG-58X on a plastic form cut out of a Folgers coffee container.

The number of turns is probably overkill, even for a 160 meter antenna! It's not critical anyway because I also have a snap-on ferrite choke on the coax, just before it enters the house and another on the portion of the coax connecting to the transceiver. That many RF chokes is probably overkill too! 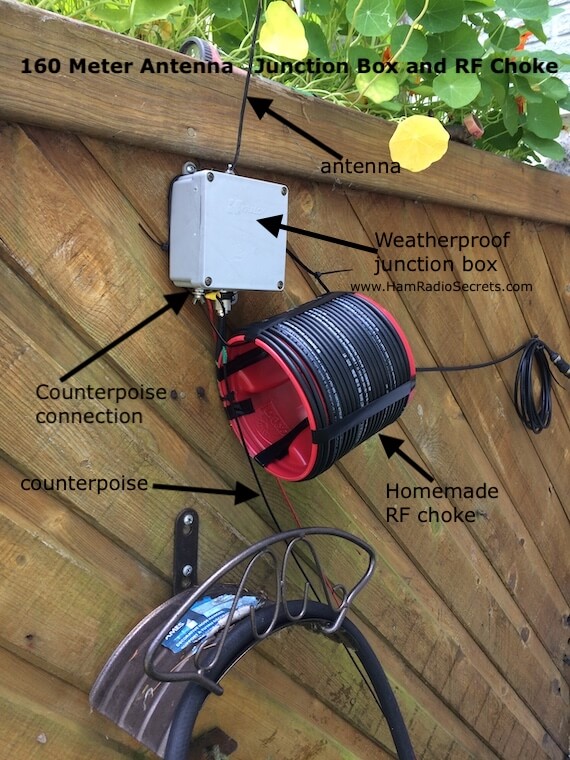 (Disregard the red wire under the box. It's from an earlier experiment. I had forgotten to take it off before taking the photo.)

I could always experiment taking the snap-on RF chokes off (not shown on the photo), one at a time, until I start to experience RF feedback in the shack... but, that's going to be for another day. ;) You see, the RF feedback could also be coming from my two other antennas:

Without enough protection from common mode RF feedback, my 160 meter antenna's coaxial feedline would likely pick up some of the RF radiated when I transmit on any of these other two antennas, and feed it back to my equipment in the shack via the coax shield!

I like to avoid trouble which is why I like more RF chokes than not enough. Even a small amount of common mode RF feedback can cause your:

Even a little unwanted RF, running around the house, can cause weird things to happen. I became very conscious of this once when my burglar alarm went off while my wife was watching her favorite TV show. A near-fatal experience!

Here are some of the SWR readings after final installation (measured in late October): 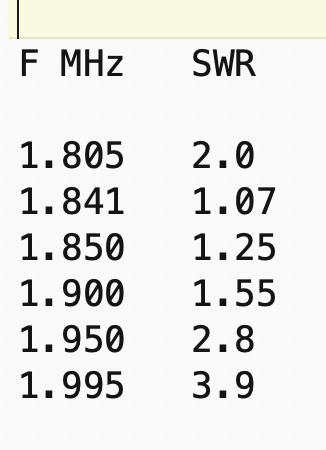 As you can see, my 160 meter antenna can cover at least half the 160 meter band within a 2:1 SWR. Any antenna tuner should be able to easily handle the higher SWR over the other half of the band.

Remember that you can choose to have the antenna resonate in the portion of the 160 meter band that you prefer - simply by adjusting the length of the counterpoise. Using an antenna analyzer simplifies this process considerably.

On the other hand, you could tune the counterpoise to make the antenna resonate in the middle of the band at 1.9 MHz. Any broad range 'L' network tuner will easily handle the higher SWR values at each end of the band.

A Word About Dimensions

Now, the above-mentioned dimensions of the aerial part, and its counterpoise, might be slightly different at your QTH because they will depend on:

Anyway, you should be able to 'tune' the antenna to resonance easily enough by simply adjusting the length of the counterpoise, like I did, and thus, adapt it to its given environment.

Now, of course, the counterpoise was laid on the ground, in its final 'tuned' state, late in the month of October. I don't know yet what the resonant frequency of the antenna will be when it's buried under snow this winter.

Hopefully, the frequency of resonance will not shift prohibitively. ;)

This 160 meter antenna is a "single band" antenna. The 160 meter band is not harmonically related to higher HF bands (except perhaps for the 60 meter band).

If you want to try to use this antenna on other HF bands anyway, you will need to use a wide range antenna tuner to handle the unpredictably high VSWR values.