I have been using an HF vertical antenna - manufactured by Alpha Antenna - for over two years now. Its name was ezMilitary when I bought it. 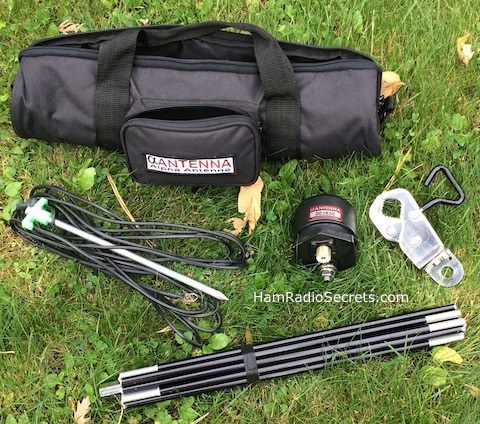 Alpha also makes antennas for military use. My antenna's name probably reflects the fact that its design is derived from a military model. (More on this antenna below).

What I don't like about the quarter-wave HF vertical antenna, as it's typically installed for home base use is that:

Amateur radio operators often install 60 or more radials in an effort to minimize losses. This is really only feasible ...

One way to almost completely overcome the losses of a buried radial system is to use an elevated system of radials or wire mesh, isolated from ground. It's called a counterpoise.

But then you will not be able to walk over the elevated counterpoise easily - unless you install it 7 or 8 feet above ground ... which would complicate installation considerably.

Another solution to prevent ground loss is the so-called ground plane. A single band 1/4 wave ground plane vertical antenna can be installed atop a tower. Note, however, that,

If the ground plane's four radials are parallel to the ground below, the antenna's impedance (atop a tower) will be around 22 ohms.

You can raise the impedance to better match a 50 ohm coax transmission cable by sloping the radials downward away from the vertical element. A 45-degree angle usually works well to that end.

There are even commercially available multiband vertical antennas. But they use traps which introduce yet another set of lossy components in the equation.

In my opinion, if you lack the space for a much more efficient full-size HF dipole, do consider one of the many space saving antennas described elsewhere on this site.

But what if you want an HF vertical antenna for outdoor activities such as camping, hiking or emergency communications when public communication networks are down?

Furthermore, what if you would like to be able to work more than one HF band with it?

What prompted me to buy the Alpha ezMilitary antenna in the first place was that I had grown tired of working on HF with makeshift wire antennas when on camping or hiking trips. Supports and anchor points were not always conveniently available!

However, my Alpha antenna requires an antenna tuner because the SWR is over 2:1 on all bands 6-80 meters except on 10 meters where the SWR is an average of 1.5:1 over the entire band.

I use the small and lightweight LDG Z-11Pro II automatic tuner with it. It ensures that the SWR is always brought down to acceptable levels for my QRP transceiver's final amplifier stage.

But having to use a tuner means, of course, that I have to carry an extra piece of equipment when using my ezMilitary HF vertical.

RFI and EMI in RV Environment

My ezMilitary vertical antenna was picking up an S6-S9+ noise when we were out camping with our RV. I eventually discovered why.

All RVs are equipped with:

Our tent trailer was no exception. Neither is our recently acquired travel trailer!

When our RV is plugged into the camping's 120 VAC 60 Hz power network, the RV's power converter ...

But the wires between the power converter and the breaker box act as antennas and radiate a strong 3.5 kHz signal!

To make matters worse, all the other RVs in the camping grounds are also happily radiating away - adding their contribution the RFI level.

When I discovered this, we tried camping in the wild, just relying on battery power.

That's when I discovered another source of RFI. The propane gas detector in our RV also radiates interference. Sheesh!

The detector is permanently hooked up to the batteries. The only way I was able to operate on HF while camping in the wild was to disconnect the RV's battery from it. Then the propane gas detector stopped radiating and my receiver was finally able to operate interference-free.

I would simply reconnect the battery to the RV when through operating.

I bought a 120 Watt solar panel to keep the RV battery replenished while operating. The solar panels also serve to charge the RV batteries when I'm not using them for ham radio.

I can accept the presence of QRN. My SDR receiver's noise filtering can usually take care of that very effectively. But RFI and EMI? Not if I can help it!

In spite of all the aforementioned drawbacks and shortcomings of the hf vertical antenna, they are, in some circumstances, the only solution to get on HF.

I hope that my information will help you arrive at the best possible decision when acquiring or building an HF vertical antenna.